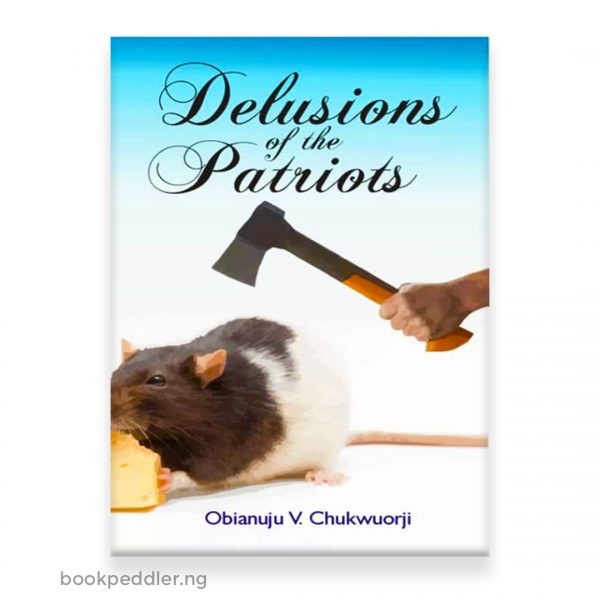 Delusions of the Patriots by Obianuju V. Chukwuorji

The novel, Delusions of The Patriots, revolves around three individuals, Okwuchukwu, founder of the group The Patriots, whose mission is to rid the political system and the civil service in Nigeria of corruption and misappropriation of public funds; Nwakaku, an only child whose encounter with The Patriots separates him from his mother as he is forced to flee his village and live with an eccentric uncle in the city; and Ogbonnaya, a brilliant detective with the Department of State Services who is assigned to bring down The Patriots.

Okwuchukwu blames the system for the terrible losses he suffered as a child and is on a mission to punish those he believes are responsible, to bring justice to the oppressed and deliver the masses from the people in government who squander monies meant for the common good on frivolities. He recruits young, impressionable, unemployed graduates and gradually forms a syndicate that operates outside the law to bring about their own brand of justice, effectively using kidnapping, blackmail and extortion to get the results they desire. As his organization grows and takes on more corrupt politicians, he gradually begins to lose grip on his followers. While he struggles to regain absolute control, the death of a minister in a kidnapping-gone-awry, brings about the fragmentation of the group and makes Okwuchukwu question his beliefs and his understanding of the make-up of the average Nigerian.

Ogbonnaya, in order to come out of the grip of an overbearing and influential father, refuses to join the family business. In rebellion, he joins the Department of State Services but is still not completely free as he finds it difficult to give up the luxuries he had become accustomed to while growing up. He is saddled with the task of uncovering the masterminds behind the group, The Patriots. This becomes the most complex case he has ever worked on as The Patriots seems to be one step ahead of him at every turn. He goes undercover as a chef to a minister he made a bait for the group by leaking his financial indiscretions to the press. Things take an unexpected turn when an attempt is made to overthrow the government. A chance meeting with a mysterious lady he hit with his car would further complicate his life.

Nwakaku who has lived all his life with his mother in his village, had the misfortune of running into a splinter group of the Patriots who engages in illegal activities along the southern coast of the country. His mother, fearing for his safety, reaches out to a relative to take the boy in, when it became obvious that their village head knew and aided the activities of the group. Nwakaku travels to the city to live with his wealthy uncle, where he struggles to adjust to this new life while battling the nightmares he could not leave behind.

These three different individuals would have to fight for what they believe is right and for their very own survival.

Be the first to review “Delusions of the Patriots by Obianuju V. Chukwuorji” Cancel reply