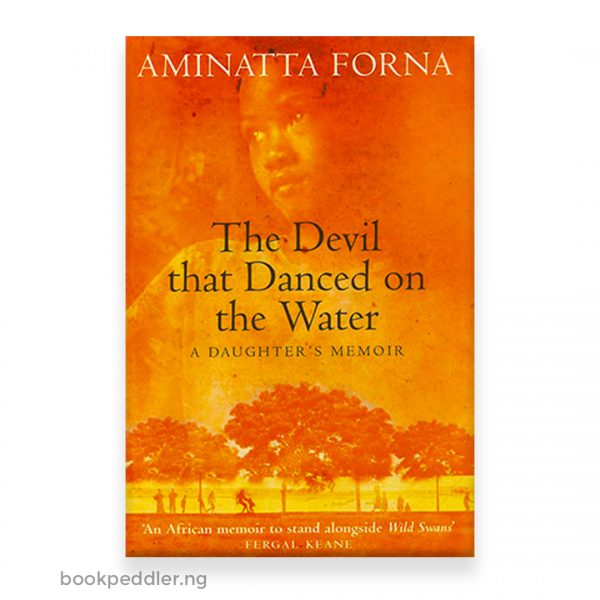 The Devil that Danced on the Water, a memoir by Aminatta Forna

An evening in 1974 when she was ten years old, Aminatta Forna opened the door to two men, members of the state secret police, come to take her father. A year later he was killed.

The Devil that Danced on the Water is Aminatta’s search for the truth of her father’s fate, moving and terrifying in turns, always compelling, it traces events leading to the moment of his arrest. And what happened after he was taken away.

Aminatta Forna’s luminous memoir is a vivid and passionate account of an African childhood, of an idyll which becomes the stuff of nightmares. As a child she witnessed the upheavals of post-colonial Africa, danger, flight, the bitterness of exile in Britain and the terrible consequences of her dissident father’s stand against tyranny.

Mohamed Forna was a man of unimpeachable integrity and great charisma, who quoted Alexander Pope: ‘Honour and shame from no condition arise: Act well your part for there the honour lies.’ As Sierra Leone faced its future as a fledgling democracy, he was a new star in the political firmament, a man who had been one of the first black students to come to Britain after the war. Already a political firebrand and a stylish dresser, he stole the heart of Aminatta’s mother to the dismay of her Scottish Presbyterian parents and returned home, one of those Wole Soyinka has called the ‘Renaissance generation.’ But as Aminatta Forna shows with compelling clarity, the old Africa was torn apart by the new ways of Western democracy, which gave birth only to dictatorships and corruption of hitherto undreamed of magnitude. It was not long before Mohamed Forna languished in jail as a prisoner of conscience and worse was to follow.

Aminatta’s search for the truth that shaped both her childhood and the nation’s destiny begins among the country’s elite and took her to the heart of rebel territory. Determined to break the silence surrounding her father’s fate, she ultimately uncovered a conspiracy that penetrated the highest reaches of government and forced the nations politicians to confront their guilt.

The Devil that Danced on the Water is a book of pain and anger and sorrow, written with tremendous dignity and beautiful precision: a remarkable story of a father, a family, a country and a continent.

Be the first to review “The Devil that Danced on the Water, a memoir by Aminatta Forna” Cancel reply