The alchemist is a story of self-discovery in which the protagonist by name Santiago sets out on a journey to achieve his dreams(literally), a beautiful read that forces the reader to introspect and ask questions, published in Brazil and subsequently translated to 56 languages.

The story begins with Santiago reminiscing about his choice to be a Shepard despite the lack of financial gain and against his parents’ hope for him to be a priest, choosing to go after his dream of traveling the world which being a Shepard offered at the time. Santiago found his heart longing for a merchant’s daughter who he had met the last time he was on that path, already making plans to ask for her hand but it wasn’t to be because unbeknownst to him there was much more ahead of him than he could have ever imagined.

One night as he was sleeping with his sheep he had a dream, one he had had times before and decided to get answers from a mystic, next he was visited by a messenger of God by the name “King Melchizedek of Salem” who gave him some advice and set him on his journey to his treasure.

In a foreign land, the boy Santiago had to overcome a lot of challenges and trouble, being robbed and beaten, traveling for days in the desert before finally getting to his treasure which had been close by all along.

The alchemist is a book for every millennial trying to figure out where we fit in in the grand scheme of things, a book that proves that when we choose to do something and put in the effort, success is attainable even if we face obstacles and challenges on the way.

But despite the stellar reviews and praises, the book has received, some are of the opinion that it is more of an ideological work which won’t work well in the practicality of life, dabbling in some sort of religious optimism which doesn’t conform with realistic establishments.

An engaging book filled with profound wisdom which most can relate to, but you don’t have to take my word for it as you can get a copy at bookstores around you to have a first-hand opinion of it. 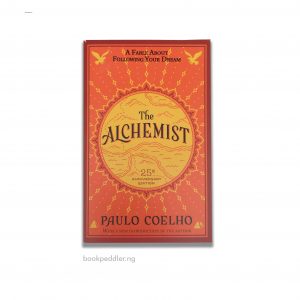 Get A Copy of The Book